This is the classic developmental psychology study which you will look at for your H167 AS OCR Psychology exam. You will also need this study for your OCR H567 A Level Psychology core studies exam.

The theme of the developmental psychology studies in the H167  exam is external influences on children’s behaviour . This study by Bandura, Ross and Ross (1961) focuses on the transmission of aggression through imitation of aggressive models.

What is a model?

A model is a person or persons which perform behaviours in the contexts of psychological studies. Such behaviour may or may not be imitated by participants in the study.

What theory is the research based on?

Social learning theory. Social learning theory suggests that behaviours can be learned through vicarious learning. Vicarious learning occurs through observation of others’ behaviours. When we see another individual being rewarded or punished for a behaviour we can learn that the behaviour should be conducted or not conducted. For example, imagine we see a person driving fast down the road and they get a speeding ticket for it. We would be less likely to repeat that behaviour of speeding. Further reading is highly recommended to enhance your learning:  Social Learning Theory (Prentice-Hall Series in Social Learning).

Previous research has shown that children will readily imitate behaviour demonstrated by an adult model if the model remains present (Bandura & Hudson, 1961).

However, although such research has provided convincing evidence for the influence and control exerted by role models on the behaviour of others, until this study, little was known about how the behaviour displayed by a model might affect an individual in novel settings when the model is absent.

This present study therefore firstly exposed children to aggressive and non-aggressive adult models and then tested the amount of imitative learning demonstrated by the children in a new situation in the absence of the model.

Aim of the Experiment

The aim of Bandura et al. (1961) was to demonstrate that learning can occur through mere observation of a model and that imitation of learned behaviour can occur in the absence of that model.

Bandura, Ross and Ross (1961) used a laboratory experiment with a matched participants design.

There were three independent variables:

Participants were matched through a procedure which pre-rated them for aggressiveness. They were rated on four five-point rating scales by the experimenter and a nursery school teacher, both of whom were well acquainted with the children. These scales measured the extent to which participants displayed physical aggression, verbal aggression towards inanimate objects, and aggressive inhibition. On the basis of these scores, participants were arranged in triplets and randomly assigned to one of the two experimental groups or to the control group.

The study was conducted in three stages.

The children in the experimental conditions were individually taken into a room and sat at a table to play with potato prints and picture stickers for 10 minutes whilst: – The aggressive model began by assembling a tinker toy set but after about a minute turned to a Bobo doll and spent the remainder of the period physically and verbally aggressing it using a standardised procedure. – The non-aggressive model assembled the tinker toys in a quiet subdued manner, totally ignoring the Bobo doll. – The control group did not participate in Phase 1.

All the children were then taken individually to an anteroom and subjected to mild aggression arousal. Initially they were allowed to play with some very attractive toys but after about two minutes the experimenter took the toys away saying they were reserved for other children. However they could play with any of the toys in the next room.

The children were observed through a one-way mirror for 20 minutes whilst observers recorded behaviour (with inter-scorer reliabilities of .90 product-moment coefficients, meaning different raters mostly agreed about the observed behaviours) in the following categories:

Children in the aggressive condition showed more partial imitation and non-imitative physical and verbal aggression than those in the nonaggressive or control conditions. Results here were however not always significant.

Children in the non-aggressive condition showed very little aggression, although results were not always significantly less than the control group.

The behaviour of the male model exerted greater influence than the female model.

Children will imitate aggressive/non-aggressive behaviours displayed by adult models, even if the model is not present.

Children can learn behaviour though observation and imitation.

Both boys and girls are more likely to learn highly masculine-typed behaviour such as physical aggression from a male adult rather than a female.

Boys and girls are likely to learn verbal aggression from a same-sex adult. 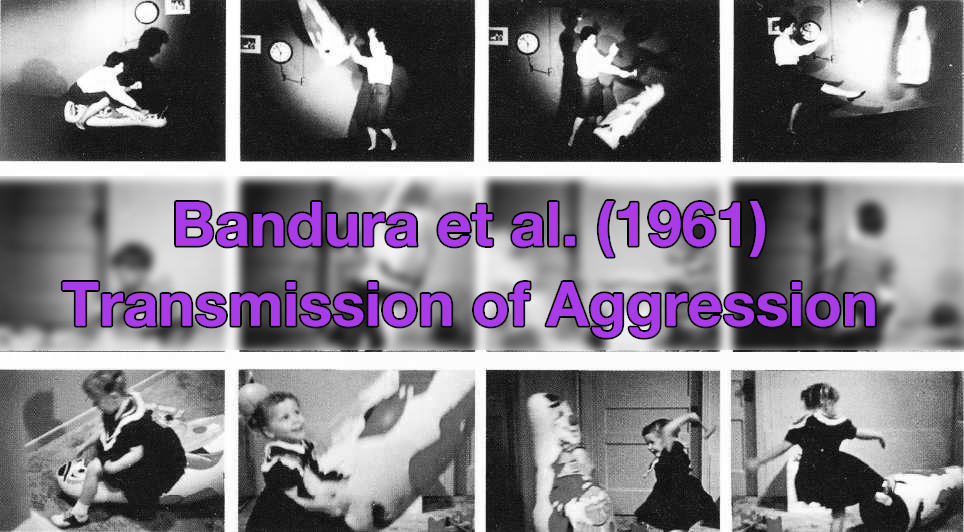