This study was published in the Journal of Abnormal and Social Psychology in 1963.

Obedience is common element found in everyday life. From obeying teachers in school, policemen on the roads, to safety signs. We obey all the time, often blindly.

It is highly recommended that you read Obedience to Authority: An Experimental View  in order to get a better understanding of the material.

Milgram was interested in understanding how Nazi SS Officers and soldiers could commit the atrocities they did in the Holocaust. Milgram reasoned that there wasn’t a group of people who shared a common goal through free will, but a group of people who obeyed a common goal through successive obedience: Hitler sends his orders, his subordinates obey, their subordinates obey and so on. Milgram theorised that it was the social situation that caused ‘normal’ people to kill millions of innocent people.

Milgram’s study took part in an interaction laboratory in Yale University. (There were more subsequent studies in different locations such as a basement in the university, however we need not concern ourselves with these for the exam)

Aim of the Experiment

To investigate what level of obedience would be shown when participants were told by a figure of authority to administer electric shocks to another person.

To be able to quantify obedience.

To understand if Nazi soldiers are fundamentally different to normal people. This was the reason that Milgram originally had for creating this study.

The method was a Laboratory Experiment using an independent measures design. (Independent Measures design means that the participants only take part in one condition of the experiment!)
It also was a controlled observation.

Volunteer sample using 40 male participants from the New Haven area. The participants were informed of the experiment from a newspaper advertisement and direct mail solicitation and they were all paid $4.50 just for turning up to Yale, they were told that they did not have to do anything after that. $4.00 was paid simply for showing up and $0.50 was paid for ‘car fare.’

The participants were all male and were aged between 20-50. They were from a variety of occupations and education levels.

Milgram excluded students from the study because he completed pilot study with only students and concluded that there is something fundamentally different about students.

No Control group was used.

This shock generator also created electric sounds, which served to increase the realism of the experiment.

Upon arriving to Yale University and being met by the experimenter who was wearing a grey lab coat. The subjects were told that they would be participating into a study of learning and memory. (This was in fact a lie, the study was looking into obedience)

In the room that the participant had been taken to had a shock generator, which was fake, but looked and sounded real.

The teacher was told that the shocks can be painful, but not harmful.

The learner, Mr. Wallace reported that he had a heart condition.

As the teacher increased the shocks recordings of the learner complaining were played.

Here are the four prods:

When the participant was debriefed they were told about the true nature of the experiment and were introduced to Mr. Wallace so they could see that he was not hurt in anyway. This is very important from an ethical point of view, think about how you would feel if you thought that you had hurt or killed someone.

Milgram had predicated that less than 3% of the participants would continue to 450 volts. This prediction is not confirmed by the results of the study. In fact Milgram was almost completely wrong in his prediction.

100% of all the 40 participants reached 300 volts on the shock generator. At this point only 5 participants refused to continue anymore with the experiment.

At 375 volts a further 9 participants refused to go further

26 or 65% of the participants went to 450 volts, which was the maximum level of shock that could possibly be administered.

Participants sweated, trembled, stuttered, bit their lips, groaned, dug fingernails into their flesh, and these were typical not exceptional responses.

Quite a common sign of tension was nervous laughing fits (14 out of 40 participants), which seemed entirely out of place, even bizarre.

On one occasion, a participant had such a violently convulsive seizure that the experiment had to be halted.

– Milgram concluded that there were a number of factors that contributed to the participants high level of obedience. These include: location – the experiment took place in the interaction laboratory in Yale University. This prestigious institution may have in part caused some of the obedience. In fact Milgram replicated his study in a number of different locations to test this hypothesis and found that location did indeed play a part in levels of obedience. The formality of the situation was believed to have contributed to the obedience witnessed, if the situation was less formal, we could expect to see far less obedience than was witnessed. Further potential reasons for the level of obedience witnessed include:

There were two proposed explanations of the obedience witnessed:

Individual explanation – Something about them as people caused them to obey.

Situational explanation – the situation they were in influenced them to behave in the way that they did. Factors influencing this were that they had volunteered for an experiment for which they had been paid, the formality of the location and the behaviour of the experimenter. This is the explanation that was favoured by Milgram because he was a social psychologist.

+ Ethics – the only part of the study that was high in ethical principles was the debrief that the participants were given at the end of the study.

+ Laboratory Experiment – the use of a laboratory experiment is a strength because it allows the experimenter to control many of the extraneous and confounding variables, this increases the validity of the results and conclusions of the study because we can see that the independent variable caused the change.

– No control group – having no control group means that the validity of the study is somewhat low because the experimenter cannot establish if the independent variable caused the change, it may have been something in the participants that caused the results and not the authority figure.

+ Reliability – the use of a laboratory experiment is a strength because it increases the reliability of the results and conclusions of the study.

– Ecological validity – the use of a laboratory experiment is a weakness because it means that the ecological validity is low, therefore the results cannot be easily generalised to real life situations. This is furthered as the participant was put in a novel situation, that is it was not a situation that they would find themselves in, in normal life. Furthermore, we can argue that the experiment has not informed us about obedience in everyday life and that it has only informed us about the obedience in that one situation.

+ Usefulness – the experiment is useful because it does provide some support for the hypothesis that ‘Nazi soldiers were fundamentally different to normal people. Moreover, the study is useful because it tells us that we have a tendency to follow people with authority.

Obedience to Authority: An Experimental View

Behind the Shock Machine: The Untold Story of the Notorious Milgram Psychology Experiments 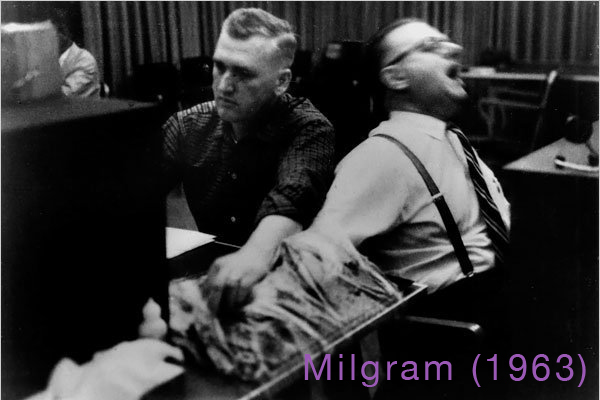