This is the classic individual differences psychology study which you will look at for your H167 AS OCR Psychology exam. You will also need this study for your OCR H567 A Level Psychology core studies exam.

The theme of the individual differences psychology studies in the H167 exam is understanding disorders. This study by Freud (1909) focuses on Little Hans’ Phobia.

If you want to further your understanding of this case, consider reading the entire case history written by Freud: Case Histories I: ‘Dora’ and ‘Little Hans’ (The Penguin Freud Library, Vol. 8)

What theory is the research based on?

Little Hans before his phobia developed was described as a cheerful and straightforward child. During this case study, Hans’ was between 3 and 5 five years old. Hans’ father first started documenting Hans’ behaviour when he was 3 years old and was starting to develop his theory.

Aim of the Study

Freud did not actually work with Little Hans in person, but instead Hans’ father wrote letters to Freud about Hans’ behaviour. Hans’ father acted as a proxy to Freud and observed Hans’ and asked him questions, all of which were the relayed to Freud via the letters.

This study is considered a longitudinal case study, but it also contains observations and elements of interviews.

It is important to note that Hans’ father was a supporter of Freud’s theories. Why might this affect the results?

For the duration study when Freud was involved, Hans’ was five years old. Although, as mentioned previously, Hans’ father documented Hans’ behaviour from age 3.

Just before turning 3, Hans’ started showing interest in his ‘widdler’ (penis) and the presence/absence of this organ in others – human and non-human.

When he was three and a half, Hans gained a baby sister, Hanna, whom he resented and subsequently, subconsciously, wished his mother would drop in the bath so she would drown.

Hans’ and his family lived opposed a busy place which had many coaches (drawn by horses, remember this is in the early 1900s in Vienna).

Later Hans developed a fear of being bitten by white horses. This seemed to be linked to two incidents:

His fear was then generalised to carts and buses.

Both before and after the development of the phobias (of the bath and horses), Hans was both anxious his mother would go away and prone to fantasies and daydreams. These included: – The giraffe fantasy. – Two plumber fantasies. – The parenting fantasy.

The first plumber fantasy: Hans was in the bath and a plumber came and unscrewed it. The plumber took a big borer and stuck it in his stomach. A Borer is a tool used by plumbers which is similar to a corkscrew.

The second plumber fantasy: The plumber in this fantasy took away Hans’ behind and widdler (penis) with a pair of pliers and replaced both his behind and his widdler with bigger ones.

The parenting fantasy: Hans’ describes a fantasy where he is married to his mother with children, but Hans’ father is now the grandfather as opposed to being Hans’ father. Think about how this relates to the Oedipus complex which was mentioned earlier.

Having received ‘help’ from his father and Freud, after the parenting fantasy, both the ‘illness’ and analysis came to an end.

Little Hans’ fear of horses was considered by Freud as a subconscious fear of his father. This because the dark around the mouth of a horse + the blinkers resembled the moustache and glasses worn by his father. He was fearful of his father because he was experiencing the Oedipus complex.

Hans’ fascination with his ‘widdler’ was because he was experiencing the Oedipus complex.

Hans’ daydream about giraffes was a representation of him trying to take his mother away from his father so he could have her to himself – another feature of the Oedipus complex.

Hans’ fantasy of becoming a father with his mother, suggested to Freud (1909), further evidence of the Oedipus complex.

Freud concluded that his study of Hans provided support for:

– Unfalsifiability – one of the biggest problems with Freud (1909) and Freud’s theories in general is they are unfalsifiable, which means they are not scientific, as they cannot be proved wrong.

+ Usefulness – Freud’s study of Little Hans and his theories have proved useful for helping people deal with issues and for developing psychology into the study of the mind as opposed to studying reaction times.

– Bias and subjectivity – All of the data in Freud (1909) was gathered by Hans’ father, who was a supporter of Freud’s work. As a result, he may have only documented Hans’ behaviours which provided support for Freud’s theory. Furthermore, Freud’s interpretation of Little Hans’ behaviour is highly subjective.

– Generalisability – as the sample of the study only consisted of one little boy from Austria, it is difficult to generalise the results of this study to other children with phobias.

+ Ethics – Hans was protected from harm during this study.

When answering any question on Freud in your H167 or H567 exam, try to use the word ‘unconscious’. 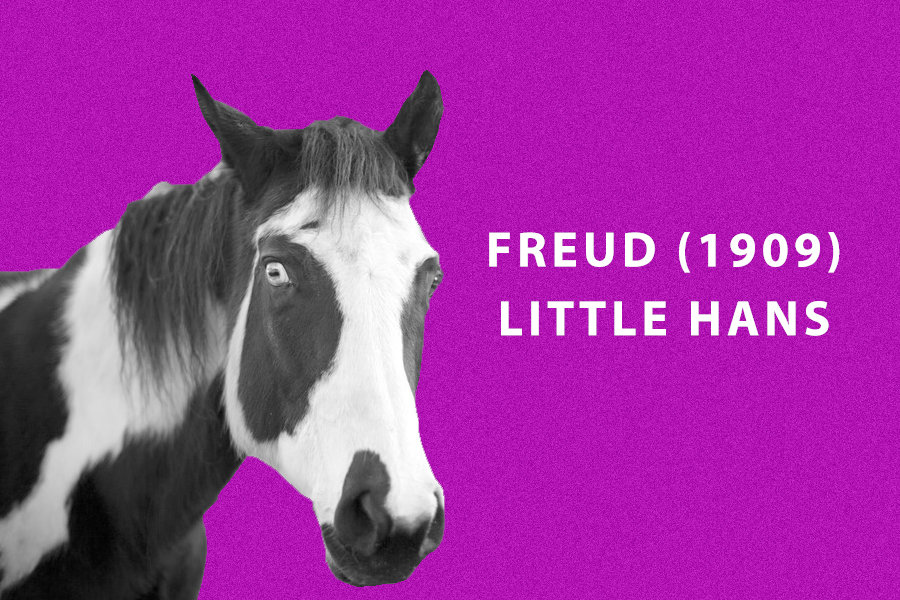 Article Name
Freud (1909) - Little Hans
Description
Revision materials for Freud (1909) into the phobia of Little Hans, which you will need for your OCR H167 and H567 Psychology A Level exams.
Author
Psych Yogi